Well, 2013 is just about over, and I thought I’d report on my goals for the year! Here’s my list from January:

Happy December, all and sundry!

I’m wearing a SWEATER today, which makes me happy. It’s in the fifties and cloudy and looks like rain, which equals winter in Phoenix. Might be going up north this weekend to catch some potential snow, which would make me happy. 🙂

In update-ish news, I DID complete my 50K for NaNoWriMo. I finished on the 20th in time to enjoy a visit from my sister and her husband and to eat lots of turkey without writing-related guilt. I did not, however, reach the end of the book. There’s probably 15-20K left to go, and my outline is reaaaaaalllllly sketchy at this point. Not sure where it stands in Writing Project Priority currently. I’ll probably put off finishing it for a while, at least until I figure out the outline. I have reread parts of it already, and there’s some glimmers of good scenes in there, so that’s encouraging.

Also, as per my author bio in the last post, I’m participating in Pitch Wars, which is an awesome writing contest hosted by Brenda Drake, which you can read about here. I think I’m giving myself an ulcer by obsessing over the #PitchWars feed on Twitter…

Oh, and the Doctor Who 50th Anniversary special was FANTASTIC, as was Catching Fire. Frozen is next on my to-watch list, I keep hearing good things.

So I guess I need to get back to the novel revision I put aside for NaNoWriMo… And after that, I’m thinking about turning my short story idea from earlier into the year into a novel. I think it could be really, really cool.

And that, as they say, is that!

I am SO excited to have thrown my hat into the ring for Pitch Wars this year! Jumping on the #PimpMyBio bandwagon as well, so here goes:

I’ve been writing since I was six years old. I entered lots of writing contests as a kid and submitted to the (small) pool of magazines that accepted children’s stories back in the day. I got published in Stone Soup when I was thirteen, and won fourth place and an honorable mention, respectively, in the Written and Illustrated By… competition when I was fourteen and fifteen.

Since 2005, I’ve written almost six full novels and parts of three others.

My Pitch War submission is a novel I first drafted in January of 2010, and it took about six weeks to write. I creeped myself out in several parts whilst writing it, which I took to be a good sign.

I have a lot of favorite books, but if pressed I’d say my favorite is Return of the King. I adore Jane Austen, I love George Eliot’s Middlemarch, and I’m completely obsessed with Megan Whalen Turner’s Queen’s Thief series (I need the next book NOW!!). A few years ago, I got to (briefly) meet Gail Carson Levine at a book talk, and she signed my copy of Ella Enchanted, which made my not-really-all-that-inner-twelve-year-old VERY happy.

I’ve been teaching piano lessons for almost fifteen years, and have a 6′ 1″ Yamaha grand named Prince Imrahil in the living room of the apartment I share with my awesome husband. It’s not as crowded as you might think. 🙂

I love seasons, rain, and trees, and I live in Gilbert, Arizona, which unfortunately has none of those things. Bring me to a rainy green forest and I’ll be your friend for life. Fill that forest with black currant tea and Oreo cookies and books and cats, and we’ll be BEST friends for life.

Also, I have an adorable kitty named Bertram: 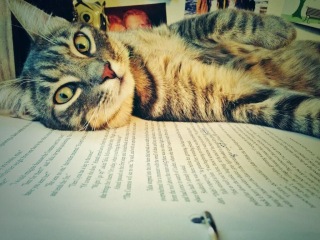 Oh, and once I went to Edinburgh and found the TARDIS: 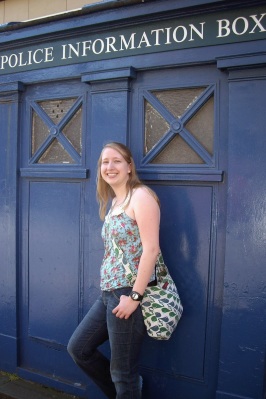 I think that about sums it up. 🙂
Onward to the Pitch Wars!!!